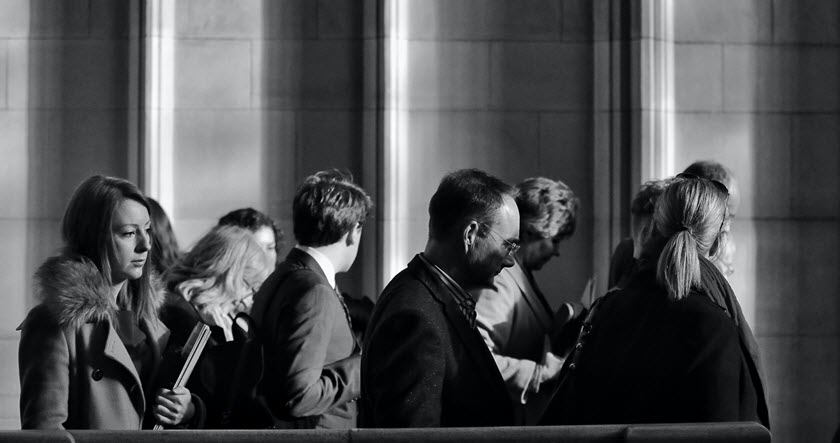 If you owned bitcoin in the early 2010s, you were somewhere between a believer in the technology and a high speculator, and you probably had to do some digging to figure out how to obtain it and where to store it. 2017 saw a new wave of buyers that were attracted to bitcoin’s flashy gains, as well as its utility, and legitimate exchanges made entry into the market easy.

Still, crypto occupied a fringe spot in finance, with plenty of detractors saying that its more than 1,000% climb in 2017 was the ending point of a speculative bubble. As the market dipped in early 2018, even the occasional HODLer might have been tempted to throw in the towel.

Today, regardless of its price, owning bitcoin is almost as common as owning stocks. Sound unbelievable? Let’s check the numbers…

The crypto market is stepping up to its place as an economic force; becoming a peer of stock, bond and commodities markets to varying degrees.

That’s nice and all, but what about accessibility? Market cap is irrelevant if crypto fails the “can I get it at the corner store” test. True to its original intent as a currency, buying or selling bitcoin is becoming easier than withdrawing cash from an ATM.

All right, let’s say you don’t have PayPal or a Robinhood account. Maybe you don’t even have high-speed internet. How can crypto bring its vaunted inclusivity to the underserved?

Here’s one way:  money transfer company MoneyGram and bitcoin kiosk operator Coinme have partnered to add 20,000 bitcoin kiosks through the U.S. as well as other nations. All you need is a cell phone.

Keep in mind, developments like this don’t just make buying bitcoin easier. They also lessen dependence on the U.S. dollar and the traditional banking system as well as boosting bitcoin’s lauded decentralization.

Survey after survey, respondents across all groups show rising interest in Bitcoin as well as its use in financial instruments. The fixed-supply cap has moved on from capturing the imaginations of average citizens to those of corporate board members. Tesla, MicroStrategy, Square and Nexon have all traded a large part of their cash holdings for BTC whether to protect themselves from inflation or simply get in on the gains from the crypto market.

Data analytics firm Palantir Technologies revealed that it now accepts bitcoin as payment directly, somewhat of a step-up from the time merchants needed to be convinced to add a crypto plug.

Perhaps it is because of this that billionaire investor Stanley Druckenmiller, himself also a crypto holder, doesn’t believe that bitcoin’s status as top token will be overtaken. As Druckenmiller told CNBC, what other cryptocurrencies offer in terms of utility over bitcoin is made up for by the latter’s recognizability and history. Bitcoin enjoys the “first mover advantage,” if you like, or perhaps “brand recognition.”

Druckenmiller expects there to be quite the struggle for market cap among other cryptocurrencies as their issuers focus on additional features like better security, faster transfer speeds and other enhancements over their competitors.

And in a turn of events that some might find amusing, Miami Mayor Francis Suarez responded to the signing of the $1.9 trillion stimulus bill by investing in bitcoin to shield against inflation. Mayor Suarez said:

I did buy bitcoin and ethereum and I bought it literally the day that the $1.9 trillion spending bill passed the Senate and it was going to the president’s desk. If the federal government’s going to spend $1.9 trillion then I think I need to have some bitcoin, and this is definitely going to go up. And frankly if they spend another $2.2 trillion on an infrastructure bill, then bitcoin is going to continue to go up. I mean there’s just no way that it can’t because I don’t think people are going to want to stay in dollar-denominated currencies.

In Miami, bitcoin is more than just a hedge against inflation, though: the city allows residents to pay county taxes and fees, and make payments for city services, in bitcoin. Suarez has also proposed Miami add bitcoin to its balance sheet.

Furthermore, Suarez hosted the Bitcoin white paper on Miami’s website to counter the legal battle over property rights within the community and grant free access to it by the public. It’s not exactly the nod that gold gets when a central bank stockpiles bullion while printing money, but it’s something.

We’ve said it before, we’re saying it again: 2021 is the year crypto went mainstream. Every week, more and more Americans join the movement. It’s clearly not too late.