E-Trade has been on the bitcoin wagon for years. Yet, while it was one of the first online brokers to offer bitcoin futures trading, it still hasn’t adopted digital assets fully into its business. Now that it’s been bought by Morgan Stanley, E*TRADE may be on the path to offering more crypto services to its customers.

E*TRADE and Cryptocurrencies: A History 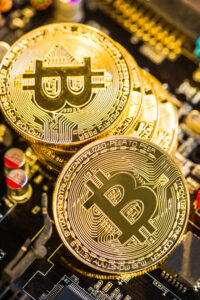 , in 2019, the company posted a series of publications written by the Financial Industry Regulatory Authority (FINRA), highlighting several areas of the cryptocurrency industry. These publications showed E*TRADE’s willingness to engage with the public on bitcoin as an essential asset. Here are a few examples:

That same year, news leaked that the brokerage was close to launching its own cryptocurrency trading functionality for its users. This would have made E*TRADE the first mainstream financial institution to allow for such trading. However, this all changed in February 2020 when Morgan Stanley bought the company for $13 billion (the deal officially closed in October 2020). Currently, under the management of Morgan Stanley, E*TRADE’s crypto plans were seemingly put on hold, with investors uncertain as to when bitcoin trading would become available through the brokerage.

Now that E*TRADE is a part of Morgan Stanley, the parent company’s stance on bitcoin is just as important as E*TRADE itself. Historically, Morgan Stanley’s relationship with bitcoin has run both hot and cold. On the bad side, the company fired several of its traders in 2019 for reportedly hiding cryptocurrency trading losses in excess of $100 million.

In March 2021, Morgan Stanley became the first big bank in the United States to offer its high net worth clients access to bitcoin via a private fund. The interest in this investment was so popular that it raised $29.4 million in its first 14 days. However, there are restrictions to these investments that require investment firms to have more than $5 million in assets and accounts more than 6 months old. Additionally, Morgan Stanley won’t let investors allocate more than 2.5% of their net worth into digital assets. All in all, this seems like a very paternalistic approach toward customers.

Additionally, Morgan Stanley does have some roots in the crypto space, with several of its former executives launching the crypto derivatives trading platform Phemex. This could be a natural entry point into crypto for the company in the future.

Currently, E*TRADE customers will have to settle for bitcoin derivatives and crypto-adjacent companies for their crypto investments. While this does give some exposure to bitcoin, they aren’t the same as purchasing crypto outright.

Morgan Stanley has already proven its on the crypto train by offering its own fund to high net worth individuals. Therefore, it seems only a matter of time before the company’s discount broker, E*TRADE, provides similar services to the rest of the retail trading community. Additionally, with increased competition from other discount brokers like Robinhood, who have already introduced crypto trading to their customers, E*TRADE has no choice but to make bitcoin available to its user base soon or risk falling behind the competition.

At one time, it seemed like E*TRADE was poised to introduce crypto trading through its brokerage. Unfortunately, this has stalled, likely due to its merger with Morgan Stanley. The company hasn’t updated investors about a new timeline on this, but it could come sooner rather than later if the company wants to keep pace with the rest of the discount broker industry.

Still, even if bitcoin trading opens on E*TRADE, it’s highly unlikely that the broker will allow such trading within IRA or retirement accounts. Buying bitcoin in an IRA requires a self-directed IRA (SDIRA) account, which traditional brokers like E*TRADE don’t offer. Therefore, in order to gain both the tax benefits of a retirement account and access to bitcoin, you will have to use an SDIRA custodian and crypto storage provider like BitIRA instead. BitIRA allows anyone to rollover an existing IRA into a Bitcoin IRA or open a new Bitcoin IRA at any time.