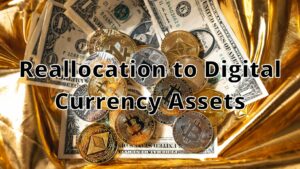 Please note: the information presented on this page is intended for educational purposes only. It is not meant to be investment advice; for such guidance, you should discuss your specific situation with a financial professional.

Traditionally, investors have relied on stocks and bonds as their primary investment assets. Many investing experts advocated for a standard portfolio consisting of 60% stocks and 40% bonds, adjusting stock allocation up and down over time, based on age and time to retirement. Yet, this model’s return on investment has not held up in recent years, especially during economic downturns. Recessions and inflation significantly reduce expected returns from both of these asset classes.

As a result, those of us saving for retirement are now more likely to allocate a portion of our portfolio to so-called “alternative” asset classes like digital currencies as a means of generating returns outside of stocks and bonds. Because cryptocurrencies come with inherent risks, most investors choose to diversify their savings across multiple asset classes as a way to manage risk appropriately.

As the industry’s leader, bitcoin represents the gold standard for digital assets, so much so that it’s often referred to as “digital gold.” Created by a pseudonymous character Satoshi Nakamoto, the premise of Bitcoin was to become the world’s first peer-to-peer digital currency. The protocol’s whitepaper described how bitcoin would maintain a secure network through a process known as mining, which uses computing power distributed across a network of participants to ensure transactions are valid and cross-check one another.

At first, bitcoin was laughed off by the mainstream media and financial industry. However, in just over a decade, bitcoin has already become a $1 trillion asset. Bitcoin’s rapid growth has quickly turned it from a fringe asset into an investment that financial professionals and Wall Street banks are taking seriously. In fact, the following financial firms and public companies have already invested in the digital currency:

The term “altcoin” refers to all digital assets that came after bitcoin. This catch-all category encompasses digital currencies with various use cases and technologies, with an implicit goal of supplanting bitcoin as the industry’s most used digital currency.

Some of the most notable altcoins include:

This group of digital assets is designed to maintain price stability no matter what is happening in the market. Stablecoins often peg their price to a fiat currency or basket of currencies but can also maintain price stability through mathematical models. Don’t expect these digital currencies to grow in price, as they are specifically designed to keep a steady price no matter the market conditions. (You can think of stablecoins as the “money market fund” of digital currencies.)

Some common stablecoins include:

The cryptocurrency industry is seemingly split between two camps. The first camp is Bitcoin Maximalists who believe bitcoin is the only digital asset of value, and the rest believe the industry will eventually fade into irrelevance. The other camp believes that bitcoin is a phenomenal digital asset but will not inevitably remain the industry’s leader. 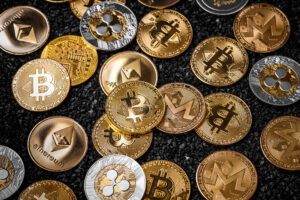 While altcoins attempt to differentiate themselves from bitcoin, these digital currencies historically have traded in lock-step with bitcoin itself, especially in the early days of the industry. From 2016-2018 Litecoin, Ripple, and Ethereum were all highly correlated to Bitcoin, meaning when its price went up or down, the others did the same.

But over the past few years, digital currency assets have differentiated themselves from the market leader. The differentiation has shown a drastically reduced price correlation between bitcoin and other digital assets and the overall stranglehold bitcoin historically held on the rest of the industry. The same is true for bitcoin’s dominance within the industry. Bitcoin enjoyed more than 80% market dominance until 2017 when its dominance began to decline. Around that time, it was clear that altcoins had their place within the market and could co-exist with bitcoin. After falling to as low as 33% in early 2018, Bitcoin has held between 40% and 70% dominance over the past few years.

As the industry continues to mature, bitcoin’s market dominance is one statistic to continue to watch. A continued decline of market share for bitcoin will prove that altcoins have cemented themself within the industry.

How to reallocate to digital currency assets

Depending on your broker, you may be able to add digital currency assets to your already existing investment portfolio. However, if your investment account is outside of an IRA, any selling and spending will trigger a taxable event. Depending on how long you held the asset which is being sold, the IRS will expect you to pay short-term or long-term capital gains taxes. Additionally, because cryptocurrency tax laws are still being formulated, these taxes could change unfavorably at any time.

But there’s a user-friendly alternative.

Whether you add digital assets inside or outside of an IRA, you will still be required to answer “yes” on the IRS virtual currency question on the first page of Form 1040. If you still have questions about this process, you can contact a BitIRA Digital Currency Specialist who can walk you through your digital currency asset options.

How should you allocate your digital currency assets?

At BitIRA, we will never provide individual investment advice, and it is up to you to do the necessary research and analysis to determine what is best for your portfolio. If you decide to reallocate your digital currency assets, BitIRA makes it easy to invest in Bitcoin, Ethereum, Bitcoin Cash, or other altcoins directly in an SDIRA.