Banking Giant Takes on Coinbase and Gemini As Its Clients 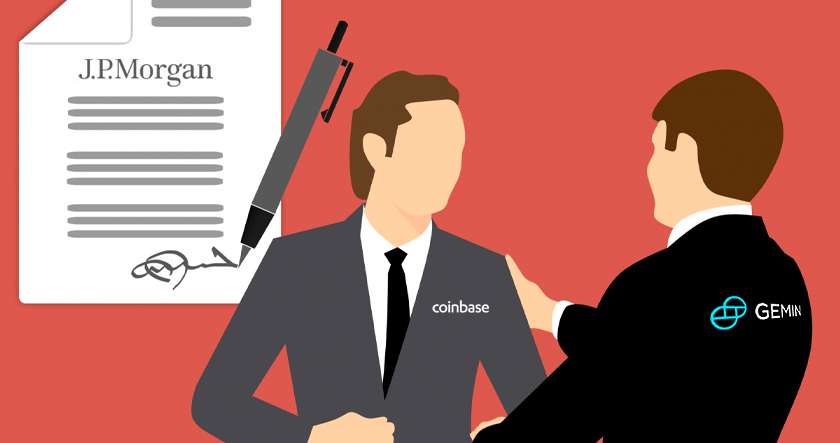 The crypto market may have just had one of its most important developments in recent memory, and it came courtesy of JPMorgan Chase. While holders and traders are focusing on the third Bitcoin halving and its potential effect on the crypto economy, the top bank’s greenlighting of two major crypto exchanges is every bit as newsworthy.

According to the Wall Street Journal’s sources, JPMorgan opened its doors to crypto in a significant way by signing Coinbase and Gemini as two of its clients. The former is one of the world’s largest crypto exchanges and often the go-to platform for American crypto investors, whereas the latter is a smaller project spearheaded by prominent industry figures such as Tyler and Cameron Winklevoss.

Although the two exchanges aren’t technically JPMorgan’s first crypto customers, as the bank had also signed transfer agent TokenSoft in 2017, the clout of the two newly-signed exchanges and the size of their consumer base makes this a step in the right direction. During crypto’s early boom, crypto exchanges shared infamously tense relationships with banks and card providers, as traditional finance initially viewed the asset class too risky or unestablished and, in some cases, even denied services altogether.

Since then, crypto has moved into the mainstream of both everyday life and regular finance, as exemplified by the inflow of institutional money and the issuing of various crypto derivatives by key legacy exchanges. There are currently even plans of opening the first native crypto bank in the U.S. in the near-term, one that would bridge the needs of various institutional clients. Just last week, hedge fund pioneer Paul Tudor Jones II revealed that his fund is now authorized to invest in Bitcoin, along with revealing that he shares a portfolio allocation of the digital asset, which has quickly come into its own as a hedge during times of extreme duress in the global economy.

Both Coinbase and Gemini are U.S.-regulated firms, which undoubtedly sped up the stringent process of getting approval to become JPMorgan’s client. Commenting on weaving together traditional banking with cryptocurrencies at CoinDesk’s Consensus, U.S. banking regulator Brian Brooks said that banks have the obligation and ability to serve crypto businesses, especially as the sector develops. Brooks’ recent appointment to the Office of the Comptroller of the Currency, as well as similar other high-level appointments of crypto experts, was seen by some as a step towards improving governmental understanding of crypto.

While JPMorgan has yet to comment on the news, their partnership with both exchanges is sure to make cryptocurrencies available to a much wider range of users. Despite initial skepticism from Jamie Dimon, its CEO, towards all things crypto, the bank has since developed its own token, the JPM Coin, which the CEO said could be used as both an internal and commercial solution.