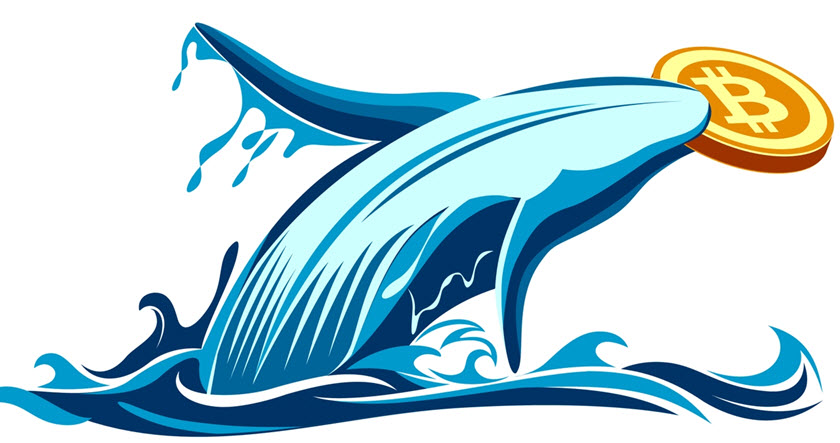 Bitcoin buyers have been pouring in from both Wall Street and Main Street. But who’s selling to them? According to the latest research by crypto analytics firm Glassnode, it’s not the “whales,” the holders of the largest stashes of bitcoin. And their insistence on holding is fueling a supply crunch and supporting bitcoin’s price.

Why do bitcoin whales matter?

Whales are what we call the 2,300 or so individual wallets who own 40% of the bitcoin market cap. Whales’ movements during big market cycles are scrutinized as a primary price determinator, especially when bitcoin traded at lower valuations. The same way some stock pickers scrutinize Warren Buffet’s annual Berkshire Hathaway shareholder letter (or lookouts in the crow’s nest of Nantucket whalers scanned the ocean for prey), crypto analysts watch what the whales do.

And even crypto whales can make big waves.

Historically, crypto whales follow the pattern described by the OKEx exchange in the 2020 rally:

During that bitcoin run-up, institutions and whales were able to buy dips and oftentimes sell when prices went up. That left the majority of the retail investors scrambling to chase the rally.

That’s not what we’re seeing today, though.

Now, whales are becoming less and less keen to part with their bitcoin even as the price flirted with $62,000. As Glassnode’s data shows, previous price peaks saw around 50% of BTC supply change hands during a bull run:

In bull markets, old coins tend to move more. This increases the relative supply of younger coins in the network. In previous BTC tops, around 50% of the Bitcoin supply was younger than 6 months. We are currently significantly below this level (36%).

More than anything, this shows that large holders are turning into long-term hodlers, choosing to keep their bitcoin instead of cashing out during a peak. It’s possible an increasing number of savers who buy bitcoin for retirement are contributing to long-term holding as well.

Why? It could mean they’re confident about bitcoin soaring to $100,000 (and above). The new whales might be institutional holders like Grayscale’s Bitcoin Trust, 3iQ’s Bitcoin Fund, or corporate CIOs including MicroStrategy and Tesla, who bought for reasons other than short-term speculation. Maybe they’re becoming wary of bitcoin’s diminishing supply and don’t want to risk taking short-term profits at the expense of larger, longer-term profits.

Bitcoin currently sits at 88.85% of its 21 million fixed supply, and some reports state that as many as a fifth of all coins are unavailable, whether due to theft or misplacement.

Perhaps even more importantly, bitcoin mining has taken a drastic turn. As opposed to its early years, you can’t just buy high-end computer hardware and mint tokens with relative ease. Today, bitcoin mining operations have come to resemble those of any major commodity, controlled by large corporations and performed in massive facilities with $1 million/month electricity bills. While bitcoin mining is profitable for them due to the lofty prices, miners’ rewards continue to dwindle, with another halving event scheduled in the not too distant future.

Combined with news that large funds and institutions are hoarding bitcoin for long-term storage, along with companies adding BTC to balance sheets, the old-school whales seem to be considering how much more their stashes could be worth down the line.

Glassnode also noted that much of Bitcoin’s on-chain activity as of late happened above the $1 trillion cap, and that dips below this cap are unlikely at this point. In what has likely been a classic display of basic economics, fewer sellers and more buyers means higher prices.

Somewhat unsurprisingly, Ethereum is facing its own supply and liquidity crisis as development of the network becomes more promising with each passing day. As the token’s price quadrupled over the past six months, data has shown that ETH supply on major exchanges sunk to a 28-month low:

The supply shortage comes amid a campaign of hoarding and high volume purchasing from both miners and institutional investors. Shortages of other cryptocurrencies on the exchanges may indicate the market is expecting further gains.

In other words, ether could be the next big HODL.