One key feature that sets crypto apart from other currencies or assets is that it’s based on a software protocol. This can be changed occasionally, and these changes get implemented as long as a consensus of users agree to them. The resulting separation of old versus new users opting into the changes is called a “hard fork.”

Since major digital currencies like Bitcoin and Ethereum have already had some forks, and the IRS is paying more attention to them—even issuing new guidance in October 2019—the need to understand what exactly happens when these forks occur has never been greater. 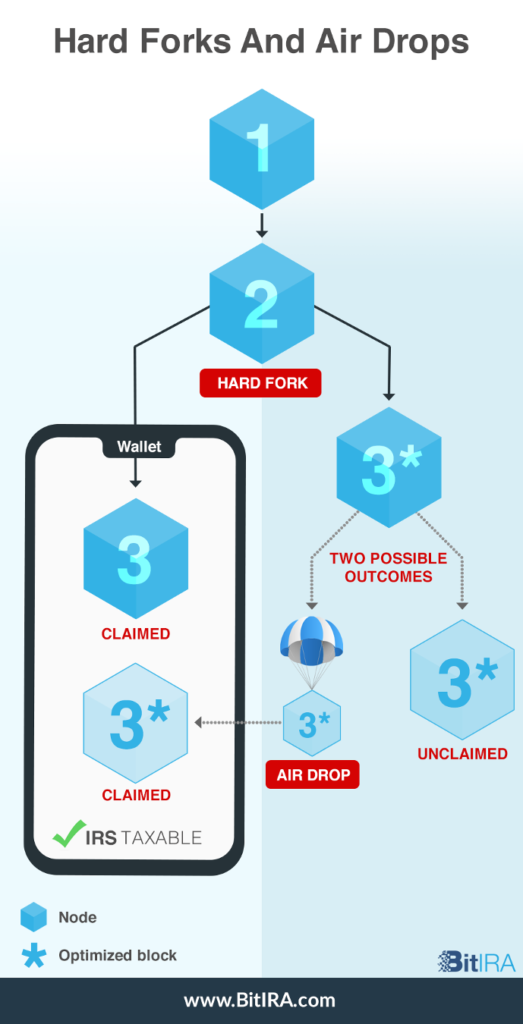 As the blockchain undergoes a hard fork, users are left with a coin from the original protocol (3). They can choose to claim the new protocol’s coin (3*), or it might be sent to their wallet via airdrop with no action taken by the user. According to the IRS, once the coin is in the user’s wallet, it is taxable—even if they did not explicitly act to place it there.

What is a hard fork?

The changes in the protocol tend to modify the underlying way each block in the chain is handled. That can be anything from changes to the size of each block through an update to fix a hack or breach in the chain. That divergence between the pre-existing protocol and the new one is the fork.

Deploying a new blockchain protocol to existing cryptocurrencies can get tricky. That’s where airdrops come into play, which we’ll cover in the next section.

These logistics can be easier to think of in terms of an example you’re more familiar with, such as a new Windows update that emerges to deal with a security vulnerability. There will inevitably be some users who update their Windows as soon as it’s rolled out, and others might forgo the newest version for a while, leaving different versions of the operating system on different computers.

However, that example is flawed for two key reasons.

In fact, Bitcoin has seen a few forks over the years. That’s why today we have Bitcoin XT, Bitcoin Classic, Bitcoin Cash, Bitcoin Gold and more. Each of these cryptos is a slightly different variation on the original Bitcoin protocol through various hard forks that have occurred throughout its history.

Bitcoin’s rival Ethereum has had its own forks. The most important one came in 2016, when $50 million worth of Ethereum tokens was stolen from a venture capital fund called the DAO. Users forked Ethereum’s chain to replace those tokens and fix the vulnerability.

The new protocol that resulted was “Ethereum.” You might be tempted to call Ethereum a “better” protocol than the original since it resolved the vulnerability, but the interference was actually considered somewhat controversial by the cryptocurrency community. Those who refused the new protocol continued with the original protocol, referred to as “Ethereum Classic.” Both branches continue to be actively traded.

The good news is that hard forks can help reinforce core cryptocurrency values such as decentralization, because they rely on a consensus of users in order to implement the changes those users deem necessary—and not some central body, whether a government office, a bank or some other financial institution.

What is an airdrop?

Not all forks result in airdrops. And not all airdrops come about from hard forks. But in general, when one crypto becomes two, an airdrop can result.

Airdrops can also occur as a marketing tool. If users of a new currency want to increase their numbers and grow attention to their crypto, they might airdrop tokens of it to a number of wallet addresses.

There have already been several large airdrops in cryptocurrency’s history. The most notable one occurred when Bitcoin Cash forked from Bitcoin. Every user who held a Bitcoin token was airdropped a Bitcoin Cash token (BCH). At the time, each BCH was worth $240. While the price of regular Bitcoins briefly dropped, this was seen by many as a straight cash giveaway. This airdrop led to the success of both forms of Bitcoin today.

One of the largest airdrops in history came from Stellar. This crypto gave away 19% of its total token supply to Bitcoin users to build its own userbase, which resulted in about a $125 million giveaway.

As you can see, these events might not be incredibly frequent, though failed hard forks do occur with some regularity. But they can be of great importance to cryptocurrency users. And the numbers can be large. But there’s another reason you should be aware of how both hard forks and airdrops work.

When stories like a $125 million giveaway (Stellar’s 2018 airdrop) and a $50 million hack (Ethereum DAO) make the news, more than just users of those currencies are paying attention. The IRS has set forth updated guidance regarding these kinds of events, so that individuals can file their taxes appropriately.

In general, if a hard fork doesn’t result in a new asset, users aren’t taxed. If it does, particularly in the form of an airdrop, that newly created asset is taxable as if it were a nonqualifying gift.

As for what lays ahead for hard forks and airdrops, plenty of questions remain. The IRS’s five-page ruling only explains so much. Besides the frequently asked questions page released at the same time, it was only the second ever such ruling on cryptocurrencies from the IRS.

Likewise, as the cryptocurrency market continues to grow and gain attention, the larger user bases will inevitably cause more forks and airdrops. As experts across the industry continue to note, interactions between major regulatory bodies like the IRS and cryptocurrency players will likely only increase further.