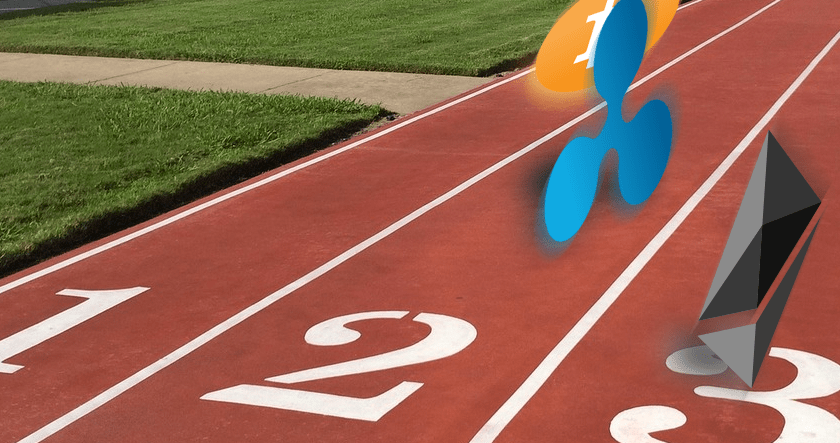 Until just days ago, the positions of the top three cryptocurrencies appeared to be set in stone, with Bitcoin firmly leading the way followed by Ethereum and Ripple. Yet in a span of just 24 hours, Ripple managed to shock even seasoned pundits by blazing past Ethereum to claim the second place in terms of market cap last week, as reported by CCN.

The price of Ripple Labs’ flagship token rose by 64% over the course of 24 hours, rounding out a week-long rally that culminated in a gain of over 113%. The jump brought XRP’s market cap to $23.9 billion, or $400 million ahead of Ethereum.

The move represents the first time Ethereum has been unseated from second place since January, when Ripple briefly assumed the role for the first time. The battle is not the one that die-hard Ethereum enthusiasts have hoped to see as ETH is, in some circles, viewed as the cryptocurrency to overtake Bitcoin’s throne.

The race between ETH and XRP stands out even more due to bottom-line differences between their respective creators. Whereas Ethereum developers take pride in the network’s utility in a variety of fields, Ripple’s primary goal is to serve as a global payments solution with a special focus on implementation by banks.

Opinions on what triggered the price jump vary, and it’s worth noting that the 24-hour period saw a broader crypto rally where Ethereum also gained around 8%. Nonetheless, Ripple Labs’ announcement that XRP-backed commercial applications should go live in October seems to have played an important role. Matthew Newton, analyst at eToro, said that the rally involved a perfect storm of favorable events for the token. Newton added that users of the trading platform have shown a great deal of interest in XRP over the past couple of days.

Ed Cooper, head of mobile at fintech company Revolut, said that high transaction values combined with post-announcement market sentiment to give XRP a leg up over ETH. Despite this, Cooper expressed doubts over Ripple’s ability to hold onto its gains given their magnitude.

Indeed, the two tokens have exchanged spots multiple times since Ripple capped off its week-long rally on Friday. After a back-and-forth over the past few days, Ethereum once again finds itself ranking second with a market cap of $22.4 billion compared to Ripple’s $21.0 billion (as of September 27). While it remains to be seen how these valuations will fluctuate in the coming days, it’s clear that both cryptocurrencies have a long way to go if they are to usurp Bitcoin and its $112 billion market cap.

While BitIRA doesn’t offer a Ripple IRA at the moment, you have many other options available for investing within your IRA. See what those are here, or get even more options by requesting a free info guide here.