Bitcoin: the Antidote to Inflation 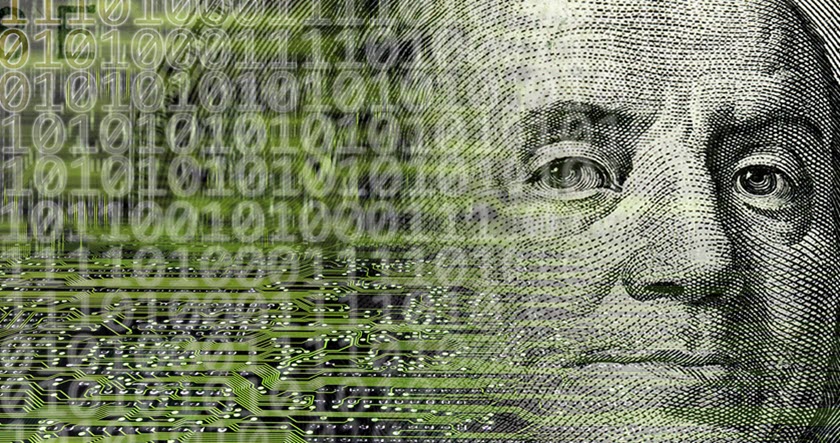 When bitcoin recently hit its all-time high of $65,000, different sources pointed to different reasons. Some swore by big name backing, others highlighted a unique bull market, and a select few voices called out inflation as the number one cause. Bitcoin Magazine’s Mitch Klee is very much a proponent of the latter idea, and his latest analysis goes into why and how the top cryptocurrency could serve as protection over what could be one of the worst inflationary stretches in decades.

Shadowstats’ John Williams is well-known for doubting the official narrative when it comes to inflation, one that would have you believe that the CPI is accurate and that inflation is hovering around a mild 1.7%. Yet, as both Klee and Williams note, the actual data leaves much to be desired.

Shadowstats was featured on CNBC after the financial crisis in 2011, after demonstrating that the U.S. Bureau of Labor Statistics has drastically changed the way it measures inflation compared to 1980.

An example of the CPI’s fallibility and inaccuracy was displayed in 2000, when the index placed the inflation rate at 1.6% but housing prices soared by 12.8% and stock valuations in the S&P 500 rose by 16.3%. Take a look at the latest alternate-inflation chart below for an idea of the difference between the old and new methods of measuring inflation:

Looking at prices of technology, one might think that deflation is occurring. After all, high-tech consumer products like smartphones, televisions and computers just keep getting less and less expensive: 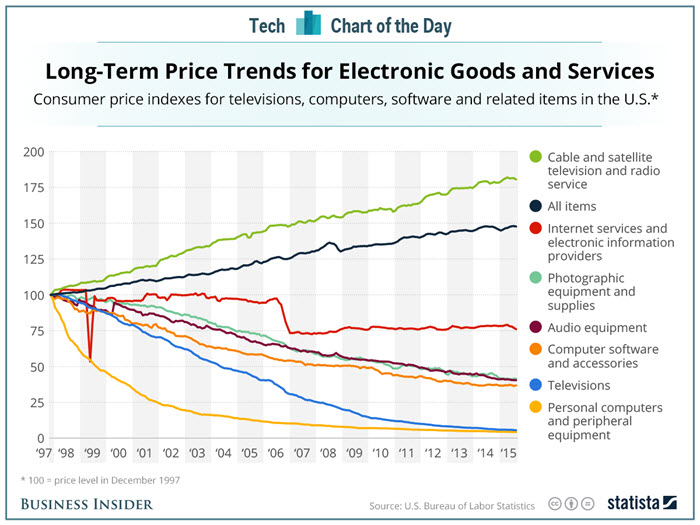 Yes, this is old data, but the trends are clear.

Williams uses the “democratization of technology” theory to explain this reduction in electronics prices. This theory explains that consumer tech becoming more affordable is simply the result of manufacturing improvements. Over time, manufacturers have made electronics vastly smaller, eliminating much of the raw materials inputs. Factories are more automated, faster and more efficient.

Unfortunately, lower prices on electronics and technological products don’t contribute much to the overall inflationary picture.

1980s CPI gauges aren’t the only warning that high inflation might already be in the books, however. M2, or the amount of liquid money currently in circulation at any given time, is what Klee points to as perhaps the most accurate way of measuring true inflation. It was conveniently, or perhaps inconveniently, discontinued as of late after showing that M2 expanded by more than 27% year-to-date. This is a staggering percentage that has historically only been approached during times of great strife.

It’s hard to wrap your head around these numbers, so here’s a picture:

Klee makes a compelling argument for where all these new dollars went:

The US government decided to mint checks and send them to people in need, but the majority of Americans received checks despite still being employed. This excess money flooded into bitcoin, stocks, and real estate. When people take their freshly minted dollars and throw them into stocks to maintain their wealth, the stocks’ valuations do not grow because the stocks are good. It simply expands the overall market by the amount of new dollars. This is known as asset inflation. If assets grew in value with no change in the money supply, that would be a different story. But that is not the case.

If the Federal Reserve bases its policies on the notion that the inflation rate sits at 2% when it is in actually running closer to 25%, and some experts believe it will continue to do so for years to come, it’s easy to see why people are attracted to an asset like bitcoin with total transparency, a refreshing lack of politically-motivated monetary policy and a fixed supply. The U.S. dollar’s untethering from gold is seen by many as the cause of the majority of economic woes that have happened in the decades since. Going back to an asset-backed dollar doesn’t seem likely, or even possible. Fortunately there’s something that might be better.

The Fed hardly instills trust with its dubious policies, shifting goalposts and audit refusals. In comparison, bitcoin is audited every 10 minutes on a public blockchain accessible to everyone, 365 days of the year.

Klee calls bitcoin the most scarce asset in the world, and it’s hard to argue this point, as even the scarcest of assets lack public transparency. The true and lasting allure comes from miners’ rewards being cut in half every 4 years as bitcoin approaches its maximum circulation of 21 million. Currently about 18 million tokens are in circulation.

When the 21 million figure is finally reached, bitcoin will very likely become the go-to gauge of what assets and currencies are truly worth. Why? Because it’s uninflatable, globally accepted, and not subject to politically-motivated tampering. Bitcoin might be the most democratic form of wealth ever created.

Should this come to pass as Klee envisions, even late investors will enjoy an accessible, inflation-proof and reliable store of wealth. Early investors who had the courage to stay the course might become the most envied people on the planet.