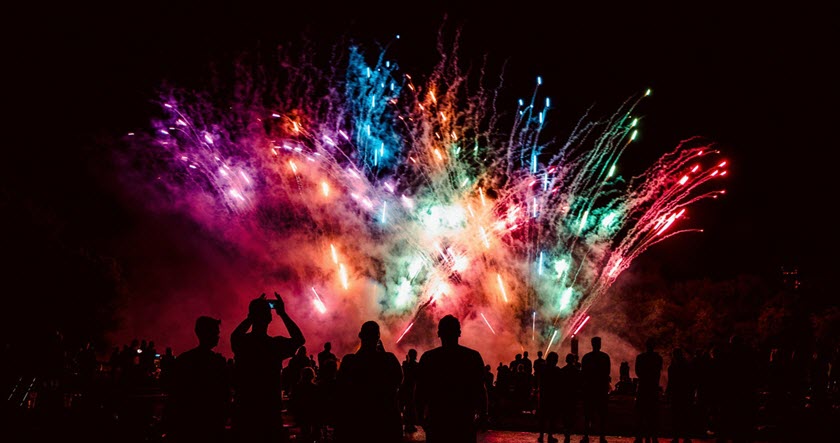 Volatility is like a fireworks display. Long-term investors can kick back and enjoy the show. Short-term speculators, caught too close to the pyrotechnics, risk more than a bad burn… Photo by Jonas Von Werne

We’ve highlighted the importance of considering bitcoin separately from the other cryptocurrencies in the market. Bitcoin’s just different. It has an unbeatable brand name, first-mover recognition and has always enjoyed the #1 spot among its peers.

Remember a few years back, when bitcoin’s price dropped? It didn’t matter how good the 10th or 20th cryptocurrency’s bottom line was: it was going to fall at least as much as bitcoin, along with the rest. That’s called positive correlation. In finance, “positive correlation” means the price of two different assets tends to move in sync, whether rising or falling.

How times have changed…

Ethereum was the first “altcoin,” if one wants to view it as such, to establish its own trajectory independent of bitcoin’s. Since then, others have increasingly done the same. And we’re not talking about stablecoins.

In May, the broad crypto market experienced a steep drop across the board. Everyone wanted an explanation. China’s crypto clampdown was the likeliest one. But it seemed as if though everyone was bracing for a repeat of early 2018.

Four months later, concerns that the crypto market was in for another devastating bear market seem silly. Prices have mostly recovered, and while still not hitting new all-time highs, they’re not too far off. Most importantly, the price action has recovered, with plenty of tokens posting their usual double-digit daily gains.

Now that bitcoin dropped from $52,000 to $42,000 overnight on September 7, everyone wants an explanation once again. Some have suggested that El Salvador’s challenges adopting bitcoin as legal tender were the reason, which seems nonsensical. Hurdles were always expected with such a revolutionary move, and we might as well attribute another Elon Musk tweet to the drop.

Instead, it looks like Bitcoin fell victim to the kind of funny, or not funny, action that happens in the stock market. The bubbled stock market always operates with a “Is today crash day?” caveat, but nobody actually goes out and says that stocks need to be done away with. On the other hand, any time bitcoin’s price drops the crypto skeptics sharpen their knives. Mainstream media is flooded with dire predictions of how the asset class has had its run, sure it was fun while it lasted. News websites publish obituaries to the entire blockchain experiment, based on nothing but a single bad day.

The crypto skeptics have one thing right, though. There is a whole lot of speculation going on in the crypto market. The September 7 plunge demonstrates the risks involved in the riskiest sorts of speculation.

Blockchain analyst Willy Woo did some digging, and discovered exactly what happened. Bitcoin is now traded with massive amounts of leverage, plenty of derivatives (futures contracts) and speculators with an incredibly short-term profit scheme. These things, along with automated trading like stop/loss orders, can bring on massive and sudden liquidations.

Here’s why: Leverage buyers operate on margins collateralized by their assets. A cursory Google search will show you ads for brokers offering 100x leverage trading. Deposit $1 to take options on $100 bitcoin. When prices go up, you’re in great shape because you’ve effectively gained 100x exposure to profits. When prices go down, well, you have 100x exposure to losses, too. Brokers usually ask for more money before selling your assets in order to cover your losses.

Even worse, Woo discovered the majority of the selling came from buyers who’d bought bitcoin recently, in the $40,000 – $50,000 price range. We doubt those buyers had any interest whatsoever in blockchain or DeFi or El Salvador. Seems much more likely they were hedge funds and quant funds and the other market participants who try to make a quick buck on volatility and, when they get their fingers burned, liquidate everything.

Checking Bitcoin’s chart shows exactly the kind of funny action outlined above. A massive and sudden drop of a single big-name crypto, a quick rebound and a continuation of an upward trend.

Bitcoin is trading over $47,000 at the moment. Depending on how watchful of an eye one keeps on the market, the drop might have gone unnoticed. A 20% drop is why some like the crypto market and others can’t stand it, but if there’s one thing the market’s history has shown, it’s that HODLers always profit in the long run.

But who was selling? Not HODLers. Mostly whales and in fact the ones that bought their btc only quite recently.

When price volatility wipes out over-leveraged speculators, you can sympathize. You can feel smug. Or, possibly the best response, is just to ignore it and move on. A brutal cleansing like this one is just a part of market dynamics. Nothing to see here, move along.

When Bitcoin dropped in May, there were calls for $19,000. Now, we are seeing renewed forecasts for $100,000 by year-end. That, along with the  generally uncorrelated movements of cryptocurrencies, should be enough to dismiss this episode as a mere curiosity.