How COVID-19 is Fueling the Adoption of Some Crypto 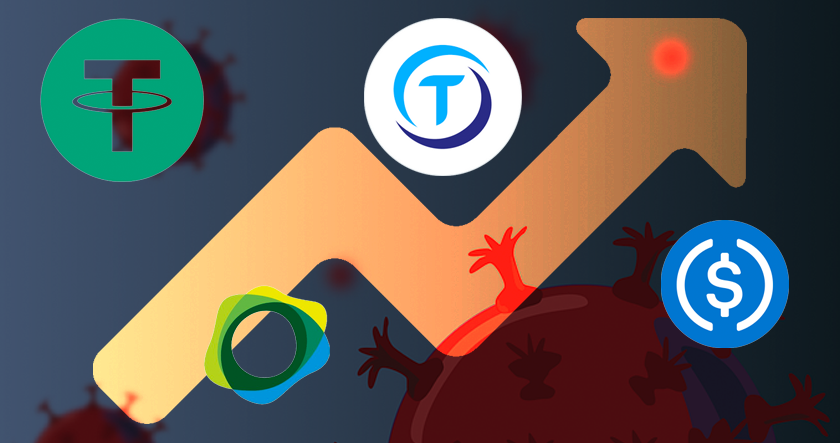 The concept of stablecoins dates back almost as far as the crypto market itself. For all their perks, decentralized cryptocurrencies have always been subject to volatility, as their value isn’t tied to any other asset or currency. Tether and USDC are some examples of private efforts to remedy this by creating a crypto whose value is pegged to the value of the U.S. dollar.

For the most part, though, these have been cast aside in favor of their decentralized cousins. Yet Cointelegraph’s Sam Bocetta believes that now is the time to re-examine the role of stablecoins in global finance and their prospects.

The spread of the coronavirus pandemic has strengthened the push for digital methods of payment due to their convenience and versatility. At the same time, the contagion has created a broad, fear-driven market selloff that has affected nearly all assets.

The market capitalization of stablecoins has grown exponentially as the U.S. dollar index soared, mirroring the flight to safety in traditional finance. To Bocetta, this shows that cryptocurrency users view stablecoins as a safe alternative during market uncertainties.

The safety of the dollar, however, could soon come under scrutiny, as could its value. Central banks around the world have slashed interest rates in response to the pandemic in a broad move that has also affected users who largely utilized stablecoins for interest-generating purposes. But, according to Bocetta, this market shift could have several positive implications.

Besides potentially expanding the scope of crypto investment among current stablecoin users, Bocetta points out that institutional interest in the technology has never been higher. As users yearn for safer and more convenient payment methods, major investment banks have taken cue, with JPMorgan Chase’s JPM Coin being the most prominent example.

The push for stable digital payments has also captured the attention of various central banks, as some government officials suggested that digital sovereign currencies should already be in place in order to better deal with crises and improve the global payment infrastructure. As was the case before the pandemic, China is looking to be the first issuer of a central bank digital currency (CBDC), with latest reports stating that the project is close to being rolled out.

Although the low interest rate environment has left some stablecoin users wanting, Bocetta notes that a market recovery will bring about new investment options and venues. In the meantime, investors and consumers can enjoy the reliability and accessibility that stablecoins offer as they watch crypto assume a cornerstone role in global finance.