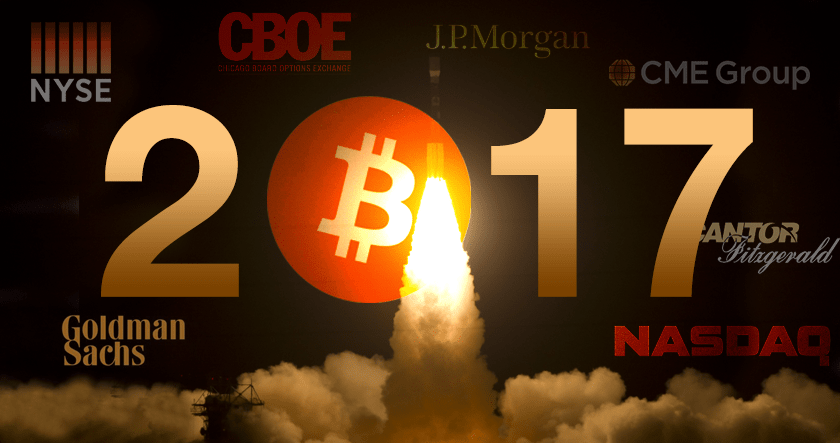 It’s official, Bitcoin has been named Investopedia’s 2017 “Term of the Year.“ Anyone familiar with the digital currency might not find this news surprising, as Bitcoin’s rapid rise has been the talk of even those outlets and institutions who have previously taken a lukewarm approach to it.

Bitcoin beat out various other trending searches, such as “Trumpcare” and “Blockchain”, to reach the top spot. The online investment encyclopedia dubbed 2017 the year of Bitcoin mania due to multiple factors, one of which is its price. The cryptocurrency began the year at $900 before surging to $20,000 in the closing weeks of the year.

Although Bitcoin has since settled above the $15,000 level, it maintains a 1,500% increase in the span of a year, assuring its spot as the most valuable cryptocurrency. And while other cryptocurrencies have also made significant strides this year, Bitcoin remains the most widespread and sought-after among the group. Aside from enjoying mainstream attention and interest from a wide variety of investors, Bitcoin was adopted by multiple financial institutions, the first time this has been done with any cryptocurrency.

Some firms, such as Chicago-based CBOE and CMO Group, have already launched their Bitcoin futures, while Nasdaq announced that it plans to do the same in 2018. Banks also showed a willingness to integrate the cryptocurrency in their dealings in some form, allowing Bitcoin to further take root in the markets.

Goldman Sachs is reportedly looking into Bitcoin trading, and its CEO Lloyd Blankfein recently pondered whether Bitcoin was the successor to fiat currencies. Reminiscing how fiat money was initially rejected by the public due to a lack of base value in the absence of a gold standard, Blankfein said that Bitcoin could overcome the same obstacles on the road to replacing hard money. Given enough trust, the CEO thinks that the digital currency has all that’s necessary to become the next international standard for money.

JPMorgan stated that Bitcoin is becoming a major asset class, with its global market strategist Nikolaos Panigirtzoglou explaining that the currency is vying for the title of the premier store of wealth.

Panigirtzoglou underlined that the introduction of Bitcoin futures, along with plans to launch Bitcoin ETFs, has done a lot to legitimize the cryptocurrency, which should lead to long-term adoption by investors. Aided by an increase in liquidity, Panigirtzoglou believes that, despite Bitcoin’s achievements so far, the digital currency still has potential to grow.

2018 is looking bright for Bitcoin and digital currency as a whole.