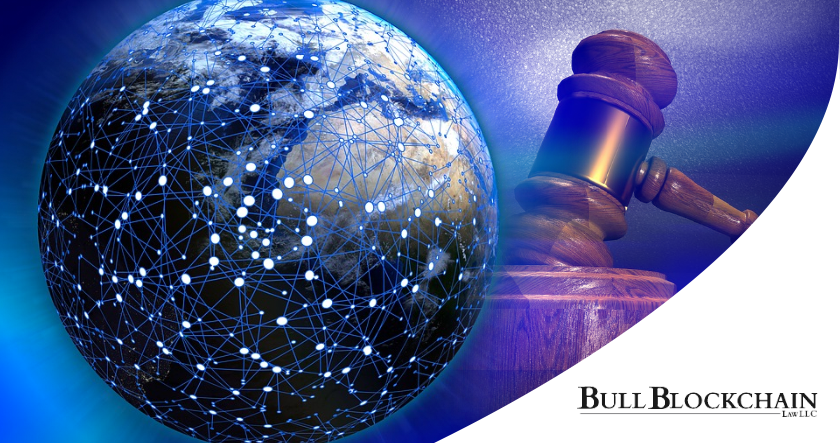 Andrew Bull of Bull Blockchain Law has emerged as a leading expert in blockchain and cryptocurrency regulation in the United States. He’s been involved in the industry since it started, and his legal career has grown in parallel—giving him unique perspective and expertise. He’s presented at conferences acros the country, and his firm has put together a comprehensive research report for the EU. Andrew sat down with BitIRA to discuss the past, present, and future state of crypto regulation—and his vision for the future.

BitIRA: Thank you for agreeing to participate in this interview. Let’s start at the beginning: what drew you into the world of crypto?
Andrew: I came across Bitcoin all the way back in 2011, actually. I found out about it on the website Reddit, where it was being discussed under the topic of “emerging fintech”. From there, onto a couple of different bitcoin forums, and then eventually found myself on Satoshi Nakamoto’s white paper.

When I read the white paper as well as some of the commentary on the chat rooms, what emerged as fascinating to me was the lack of a third party in the actual transactions that could be conducted on the bitcoin blockchain. What really struck me was that it seemed to be kind of a novel invention, for lack of a better term, in that two parties could transact with each other without needing third party verification from a either private or public entity. It was really intriguing to think about a non country-backed financial instrument that could basically function in between two parties relying on the actual computational software rather than the verification process that a third party such as a bank would implement. That was what intrigued me initially and drew me in.

BitIRA: Everyone likes to talk about how crypto is still in its relative infancy, and it would seem like cryptocurrency law is even more in its infancy, with very fundamental questions remaining unanswered—for example, who should be regulating it? You’re very much at the forefront with your blockchain law firm. Who have been your mentors and how have you found guidance in your career?
Andrew: It’s a great question. I wrote my thesis on the regulation of cryptocurrencies starting in 2013, which was when I was actually in law school. I got a law degree and a master’s degree, and basically there was no real cryptoregulation around that time. I wrote a lot about theory, and how potential laws that existed for a long period of time—such as money transmission laws or financial regulatory laws with the FTC—how things like that could potentially apply. But, again, it was all theory.

I would say that really the crypto-legal industry didn’t take off until 2017, when we kind of had this industry boom. Obviously all the CEOs were releasing tokens and making a bunch of money; regulators across the globe really started turning their heads and focusing in on the industry. Before that we had really scant compliance requirements as well as little-to-no guidance from any governing bodies. I would say that 2017 kind of marked this uptick in the legal space of watching cryptocurrency.

Who are my mentors? There really aren’t many. When I wrote my thesis, there were a couple of interactions I had with some of my law school professors who obviously they didn’t know anything about it… they couldn’t really provide me with that much support, and so I  ended up writing in this novel area of crypto-regulation. Even if you had asked me back then, when I was writing my thesis, if I was anticipating becoming a blockchain attorney I would have said no. I was not planning on doing that because it didn’t exist, and I didn’t really conceptualize that, oh, I’m writing about the regulation of blockchain and cryptocurrency.

I didn’t know the timeline for when a full fledged legal industry for crypto will exist. Once the FTC started issuing administrative rulings, and once a government or other governmental agency such as the Financial Crimes Enforcement Network—and the CFTC as well—basically once all of these governmental agencies started turning their heads and actually addressing the industry, that’s really where you saw a lot of the legal environment start to take off.

For me a lot of it’s been a compilation of talking to regulators, combined with leveraging hands-on experience. I actually come to crypto a bit from the tech side since originally I ran a mining company, where we built our own cryptocurrency miners and then had warehouses and things like that. I did that as I was becoming an attorney, so I was transitioned from the tech side to the legal side. I was able to meet a lot of different people in the industry, and we kind of collectively started trying to learn more about the regulations and how we needed to be compliant. It was kind of a more of a trial-and-error working on the actual industry side that led to having the experience and understanding of how the laws would apply.

BitIRA: What would you say are the biggest challenges you’re facing while practicing blockchain law?
Andrew: The number one biggest challenge is the lack of regulatory clarity. I speak to this with a bit of a unique voice because I’ve been fortunate to connect with many people on this topic. Actually, the European Union issued a grant to my law firm to write a research report and overview of the regulatory environment in the United States, so we’ve been doing that for the last six months. I’ve been interviewing commissioners and the S.E.C. along with other people who operate in the space, and even stakeholders. Everyone kind of shares in this general notion that more overall regulatory clarity is needed.

For example you have a lot of projects in the States who are going into other jurisdictions that have already passed legislation that is favorable toward launching cryptocurrency industries. But in the US, we really just have this compilation of administrative decisions by governmental agencies that are kind of all evaluated in a vacuum and they’re all very specific circumstances. And so, they don’t really lend much support to a broad kind of standards and practices for the industry.

We are kind of stuck in the middle between trying to synthesize old statutory requirements that governmental agencies have been enforcing into traditional fintech for a very long time, but also trying to cater towards how do we actually figure out how to implement this element of the technology that is so nascent and so new, and that really does kind of change the ultimate financial instruments that have existed for a long period of time. Regulation has not caught up with the innovation of the technology.

BitIRA: Congratulations—we can’t wait to read that report, and see what comes out of it. Speaking of what’s coming next: our last question is what problems are you most interested in seeing the blockchain and crypto community tackle next, be they legal problems or others?
Andrew: My overall answer is exposure to retail investors, and by retail investors I really mean the general populace.

This is also a prime example of kind of the dynamic that I was just talking about before where we have a gap between traditional regulation and what’s needed. When you think about finance (and especially in the United States), we have this kind of higher structure that really allows or affords people with larger amounts of capital to have access to investment opportunities while those with lower amounts of capital really don’t have that access. Think of accreditation requirements, being able to invest in private offerings, and things like that. All of those limitations have a consumer protection element. They’re really trying to protect consumers.

And we saw in the space especially with ICOs and fraud/scams in the space that governmental agencies should certainly certainly focus on eradicating crime. But at the same time I would like to see them not sacrificing the opportunities for retail investors. Think of things like the expansion of crowdfunding and tokenization in general, which has allowed for so much more access—almost immediate access—from people all over the world that might not necessarily have the credentials that the regulations require but still want an opportunity to participate. I would like to see more regulatory clarity that allows for individuals to be able to participate in the tokenization process as well as in potential tokenization investments, while also being able to actually use the tokens themselves. A prime example is in adoption. While a lot of people are trying to put towards resources towards more adoption—let’s say, like, bitcoin usage in the retail environment—that’s all well and good, but at the same time you’re establishing a lot of limitations for businesses that would be able to develop real-world solution that could allow for the increase of exposure to the general populace. Right now we just have kind of a regulatory conflict that is prohibiting that eexpansion from happening. I’d like to see that change in the future .