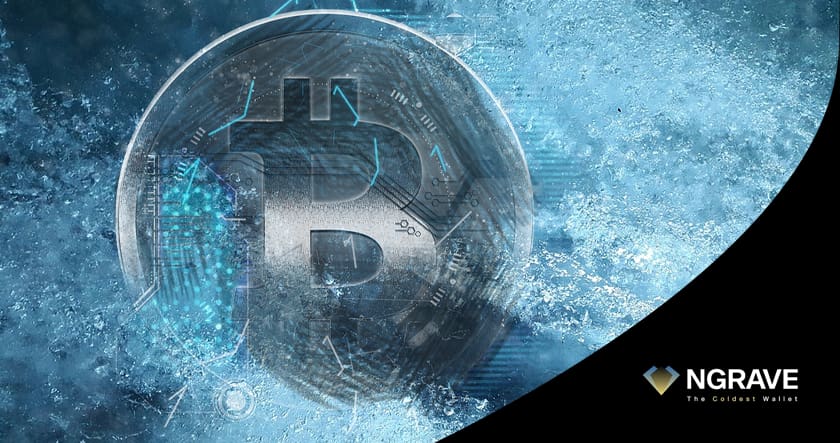 Security is paramount when it comes to any transaction. Maximum protection of personal information keeps consumers, businesses, and organizations safe from theft and identity fraud. But the field of options for cryptocurrency wallets remains limited, which has major ramifications for industry technology, business, and innovation. We spoke about this with Ruben Merre, Co-founder and CEO of NGRAVE. His team has developed a new crypto wallet that combines three complementary products into a wallet his team promises is the “coldest,” “most secure solution on the planet.” Keep reading to learn more about how NGRAVE came to be, and how they are innovating in the world of crypto security.

BitIRA: How did NGRAVE come about? How did the team come together?

Ruben: Teams are at the heart of every startup. If the team fails, all else follows. So the team members need to blend in with each other almost perfectly. We were lucky to be able to form such a magical triangle when we met.

All three of us initially met through Edouard, who knew Xavier, and who knew me. We spent our first meetings over video call, as Xavier lives in Canada. We decided to be bold and apply for one of the top tech accelerators in Europe, after we’d founded the company for one month. We first went on a generic meeting to check our chances; they advised against it as we were so early. We got a second opinion from someone else at the accelerator. This person urged us to apply, two days before the deadline. We applied. We got a pitch moment. The gentleman who initially introduced us was incidentally the one who opened the door, letting us in to pitch. Well, we pitched, and we were accepted.

This gentleman became our mentor and we met with him regularly throughout the program. Xavier flew over to be at the kick-off of the program and that’s the first time I actually met him in person. I was very happy to find out that he’s a guy that I like to work with—crucial in a team 😉

BitIRA: What drove you to start NGRAVE from scratch as opposed to bringing your ideas to an existing team?

Ruben: So, we built NGRAVE for the greater good of the whole blockchain society. What I mean by that is that first of all, we believe that we should challenge each other to become better security solutions, so that more people can both adopt blockchain and so that the technology’s potential can be realized faster.

We see it more as that we are all in this together: you, me, NGRAVE, other incumbent hardware wallets, and so on. We have this mission to build more security, all of us.

Also, if you think about it, the very fact that there are only a few hardware wallets making up the whole market today is a risk by itself. If everybody uses a Ledger and Ledger gets compromised, that’s a bomb that explodes. This kind of monopoly is not healthy from a security perspective, nor from an economic perspective. Additinally, having few players will typically keep the price artificially high, just because they can. It is called “informal collusion.”

We believe that by bringing more competition into the market, we also make that market healthier for the end consumer. The reason why we decided to strike out on our own is because we saw way too many flaws and improvement angles. It’s not just security that’s a problem. We see so many possible improvements at every step of the user journey. Hardware wallets do one thing. But you still need key backups. No single player is looking at just those two things from an integral perspective. Then there is user experience that’s lacking; today we look at small screens, a couple of buttons, typically still a USB cable, which all is cumbersome according to our own customer research, and so on.

It’s a whole product and customer experience that is currently missing. We believe we can do better. We must do better. If we want the technology to scale, it is a necessity.

BitIRA: On a similar note, has there been any commentary from their competitors? Does NGRAVE worry about someone like Ledger or Trezor coming up with their own version?

Ruben: From our competitors, not yet, so far. And yes, it is a very real possibility that they come up with something new. Product innovation is part of business. This is yet another reason for us to build the best product we can, and excel in end-to-end security, user friendliness, product and brand experience.

BitIRA: What has been the biggest obstacle that you have faced in your product development?

Ruben: Oh, there’s no doubt that we have met and still meet our fair share of so-called professionals in their field who can’t even come close to delivering anything qualitative.

On the other hand, we have also had the privilege to meet truly passionate people that go above and beyond what you ask from them.

You are not always able to control everything, but some basic things can get you far, such as doing your background research on new partners by e.g. going for some references, have smart people around you who can point you in the direction of strong professionals, and so on.

An interesting teaching might be that everything is always sales. The moment you are past that point, the real value comes out. Or doesn’t. Be as proactive as you can to find that out up front. Even some hardware wallets out there – without mentioning any names – are saying they do this and that and have a secure element inside and/or are air-gapped (i.e. no network connection), while if you examine them up close, they are basically severely lying about these things. That’s also why we believe it is important that users can have the chance to investigate our solution into great detail, so that they or the community for them, can ascertain themselves of the real quality of the solution. That’s also another reason why we believe working with the community in terms of bug bounties, etc. is incredibly important to vet your solution.

BitIRA: With threats as vast and rapidly evolving as they are, how can you remain confident that your solution will remain secure? After all, you claim some pretty big things, including that you have the safest solution.

Ruben: We are three Belgian guys from this small country Belgium. We come from a very modest generation where we typically avoid using power words like this. But the more we looked at blockchain and cryptocurrencies, the more we realized that this kind of boldness is exactly what it needs.

We cannot just build a mediocre or 80% secure solution. We have to strive for perfection if we want to build something truly secure. So we put our soul in this project every day to go for that goal of achieving a whole other level of security in every step of the customer journey. The endeavor of NGRAVE stems from that very boldness that is required to build a solution like this.

The way we approach security is from an absolute perspective. That’s pretty radical. We want the highest level of security for the end user, at all steps in his user journey.

That means we had to create a product that works completely offline. Your private keys need to be protected equally at every single step, at an absolute maximum level of protection. Nowadays, companies typically launch MVPs and then build further from there. This is a very reliable model for software, as you can modify software easily, making it grow agile together with the feedback of the customer.

When we look at current solutions in our market, we see USB sticks with security protocols, many different vulnerabilities security-wise, a lack in user experience, no end-to-end vision, and so on. The thing is, the MVPs are already out there. Now it’s our job to build something that truly protects the user. Not just in an MVP, semi-developed way. But fully, end-to-end, secure. That means we have to build a solution that is incredibly secure, is pretested by a bunch of users and co-created with them, and that passes all these rigorous security­–but also product specification—and certification tests.

We cannot build such a thing with just anyone. That’s why we partnered up with the world leading R&D and innovation hub in nanotechnology, and one of the leading teams in applied cryptography. We need the best to build the best. And hardware needs to be right from the first time.

A company like IMEC, who is specialized in making 3nm or atom size large transistors, is practically the best partner we can wish for to accomplish such a feat. It might even be a prerequisite.

Our goal is not necessarily to see professionals reading about what we do and kicking themselves for not doing this first. It’s an incredible, meticulous, stressful challenge, that takes one, maybe two years to build, for a currently still extremely volatile market, that is being attacked security-wise on many different angles on a daily basis. It’s pure chaos where we want to bring structure in.

It requires enormous passion for the underlying technology, as NGRAVE stands for fostering blockchain adoption worldwide through delivering next level security, enormous passion for product development, patience and attention to detail. It’s one of the hardest industries to be in as your money is only made so much later than the investment. It requires courage day in day out and an unwavering perseverance in trying to achieve a goal greater than yourself.