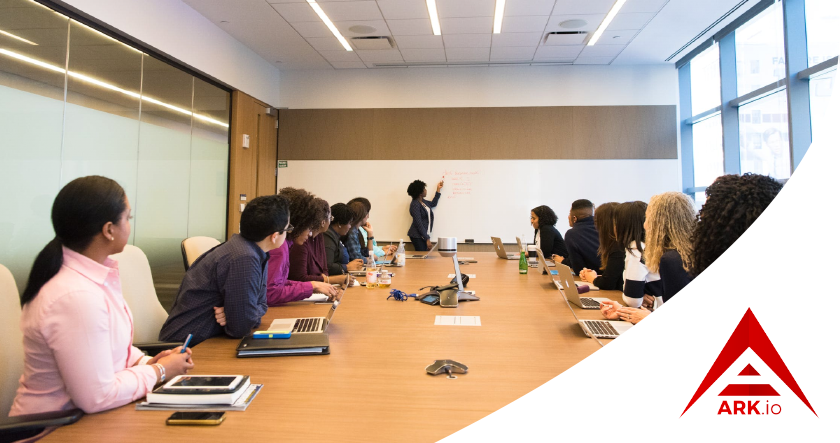 ARK strives to make the experience of using blockchain a comfortable one for everyone while also empowering the public to leverage this new technology. They’ve been building an online presence that centers around knowledge resources and community engagement, led by Communications Specialist Justin Renken. He sat down with BitIRA to discuss ARK’s work as well as the public’s perception of crypto and blockchain—and what can be done to bridge any gaps.

BitIRA: What did the path of your getting involved in blockchain and crypto look like?
Justin: Well, I first heard about cryptocurrencies from a work colleague. This was during the large 2017 hype/run-up situation. What really gripped me at first was having something that can’t be copied online but that can have an ecosystem around it.

And as I looked into it more and more, I discovered that there is a lot of opportunity for more jobs and more possibilities of ways that people can interact with each other online. It’s been communication so far [in the internet], but now [with crypto] we add value and smart money to the mix. I saw a lot of potential in the technology, and I started to get more involved with various cryptocurrency communities.

BitIRA: Jumping into the product a little, what are the implications of cross-chain communication when it comes to security? To regulation?
Justin: The biggest topic I would attach to security in terms of cross-chain communication would be finality. Finality refers to the concept of a new block entering the blockchain, then being fully propagated and injected into the chain such that rollbacks can’t really occur at that point. When you’re dealing with multiple sovereign block chains that are communicating with one another, finality is really important because certain attacks could be executed where, for example, you want to exchange some value between chain A and chain B. What needs to happen there are two transactions: one transaction between two addresses on chain A, and one transaction between two addresses on chain B.

In order to achieve this, the funds need to be locked up on the chain; this makes it cryptographically known that the funds are there and the funds can’t be moved during a specific time period. Once that’s determined, the funds are released to the respective destination addresses on both chains.

Where does finality come into play? If this mechanism is not fully prepared to handle finality, what can happen is a rollback on one of the chains such that now one of the parties involved has both sets of assets.

ARK is looking at this concept very closely. We’ve decided to look into implementing a tenderment-style consensus mechanism, in order to tweak a little bit our current decentralized mechanism, known as delegated proof-of-stake. We’re going to implement finality such that when new blocks get injected, they get injected into all of the delegates’ ledgers at the same time. This will allow for the ARK main net to communicate with other ARK-based blockchains in coupling with the time locks I mentioned earlier, known as hashed timeline contracts. So for security, finality is definitely one of the bigger issues.

Now for the regulation side of things, it’s really a matter of educating regulators and watching them catch up to the technology. This is something that also happened with the Internet itself, as the Internet came to fruition and we were dealing with things like email, privacy online, and even what constitutes a real-world version of what happens online. Over time, like after 20 or 30 years, the regulators seem to have a pretty good grip on what’s going on online. We’ve seen some really beneficial legislation come out of various countries that really helps protect kids and make the internet a better, safer place to be.

With blockchain technology and cryptocurrencies, it’s kind of like we’re starting all over again from square one—right from the beginning of the Internet. It’s going to take time to get busy regulators up-to-speed with all that’s possible with this technology, as well as with what are the important, necessary protections that people should have.

BitIRA: Are you seeing that regulators are more receptive and open to learning more about crypto?
Justin: Oh yeah. I would say that currently New York gets a lot of press for regulation on blockchain technology and cryptocurrencies. They have a very specific, hard stance on crypto there, and so there’s a lot of scrutiny and they get a lot of press.

There is a lot of progress that I see among regulators: on the state level, on the national level, and even on the international level. In fact, I’m following the Philippines closely right now. They’re a very crypto-friendly country, with fastest growing economy in Asia right now. They have a stringent legal framework for allowing exchanges to set up shop in their country. But they’re also very inviting towards crypto, and they see cryptocurrency as a way to empower their citizenry bring this innovative technology to their growing country.

Going back to states, I’ve seen states like Wyoming passing legislation that is very crypto-friendly. I really think we’re going to see more of that over time.

We actually have a team member here at ARC—Ray Alvarez—who is a certified lawyer, and who does tons of research into the cryptocurrency legislation landscape and how it’s progressing. He sees a lot of positivity coming from that space right now.

BitIRA: What are the most common misconceptions or misinformation about crypto/blockchain that you encounter in your work with the public?
Justin: Oh yeah, that’s a great question. I think it’s an important question because I’ve found from my personal experience that the deeper you go into the world of blockchain and cryptocurrencies, you might start to detach from society just a little bit. It becomes hard for you to imagine yourself even in your own shoes from years ago before you found out about it, and before you started thinking about things like the inflation of the US dollar—things that seem so natural now to people in the industry.

When I actually work on my YouTube series called ARK.io Adventures, I travel all around and talk to people about cryptocurrency. I try to educate them a little bit more as I go. And sometimes I give talks, or sometimes I just talk to random people.

I’m working on a new episode right now where I went down to Venice Beach and I had a bunch of cryptocurrency with me—like a stack of paper wallets—that I just gave out to random people that I came across on the beach, near the beach, and in Venice Beach. I ended up having a lot of interesting conversations with people there on what they think about cryptocurrency and what it means to them.

In some of those conversations, people shared they thought crypto was really shady. They thought it was only for criminal purposes for sure. You know, for example, my wife watches a lot of shows on Netflix and Hulu, and she always sends me video clips when cryptocurrency is on her shows. It’s always like, “oh the hacker was found with cryptocurrency” or “we need to send them Bitcoin to get the hostage back for the White House” or whatever. And that’s what the public is used to; that’s what they see. That’s one of the main themes that that I’ve heard.

Another common question that arises is, “Well, what can we do with it?” So I would give somebody cryptocurrency and they’d be like, “Great… cool… but now what?” or, “What do I do with it?” I can’t walk over to that ice cream stand and buy an ice cream cone with it. So it’s hard because it becmes a chicken-egg or cart-horse scenario. You need adoption on both sides in order for it to make sense to people. But somebody’s gotta go first.

BitIRA: How do you counter when people say crypto is shady?
Justin: Well, I start off by saying, “Actually, no it’s not.” I talk about my personal experiences with it, and how it’s really just a community of people that have a set of beliefs and hope for the future. They believe in making a change in the world and using this technology to do with. Whether it’s to lift up countries in poverty, bring an easier customer experience for when you’re working or shopping online, even lowering costs by cutting out the middleman. For example, I’ll talk to them about supply-chain distribution, and I’ll remind them of how annoying it when you have to pay a higher price for something that you feel shouldn’t be that high of a price—but crypto can help provide the systems to alleviate a big chunk of this.

After all, middlemen play a role in that. And the middlemen are getting more and more powerful. Blockchain technology is an alternative that can potentially address that and, in the end, benefit the most people possible. So really acceptance of crypto does require people to open up their scope of thinking to maybe beyond their own family, or their own town, or their own state, or even their own country, and really imagine what it would be like for everybody to kind of wake up one day and decide, “hey let’s kind of remake everything that we’re doing”. From there, we can go for the next plateau of enlightenment and harmony in the world. I really think blockchain can play a key role in that.

BitIRA: What challenge(s) would you like to see the crypto and blockchain industry tackle next?
Justin: I’m personally excited about a specific use case that I actually just covered on my podcast, the ARK Crypto Podcast. And in the recent episode that I just worked on, I talked about loyalty programs. I think that the first use cases that are going to get millions of users should be use cases that users already understand. I think loyalty programs are a fantastic candidate for that is because of how familiar they are consumers while also paralleling some features of crypto. After all, loyalty points are virtual non-monetary assets that also carry value in the eyes of consumers, but they’re not scary. Consumers know exactly how loyalty programs already work. They know that it’s not a U.S. dollar but it’s still useful to them.

And then once you get adoption on a high enough level with loyalty programs and people are really valuing how loyalty programs are working, then you can move on to use cases that expose the blockchain a little bit further for the user. They’ll start to realize, “Oh, actually, I’m using a new type of technology!” in the same way that people went from fax machines to the Internet. So I think that loyalty programs would be a good stepping stone for people to get their toes wet with cryptocurrencies and blockchain.