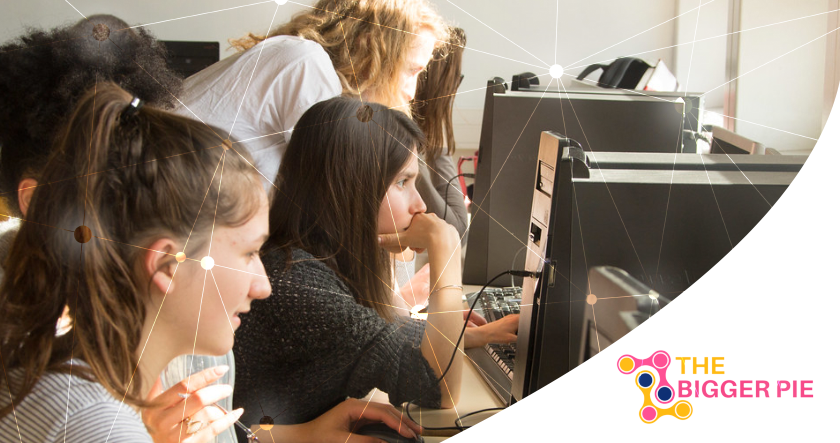 With women in crypto making up less than 10% of the workforce, gender parity is a critical topic for the world of cryptocurrency and blockchain to address. Bridget Greenwood knew she had to take action, and so she founded The Bigger Pie to create a community where individuals can speak freely about their experiences, build relationships, and know that they are supported. By creating a community that lives and breathes the way she’d like to see people respect and celebrate each other, Bridget hopes to effect the positive changes she’d like to see in the world. She recently spoke with BitIRA to share her vision for the future of the community.

BitIRA: How did you get into the world of blockchain and crypto?

Bridget: My friends across different social networks kept talking about Bitcoin and I was curious but thought oh, that’s too technical for me. But they kept mentioning it, so I thought maybe it was time to get out of my comfort zone and take a look after all.

And then as soon as anyone discovers Andreas Antonopoulos and wants to understand about Bitcoin, you’re gold. You can get it explained in terms that anyone can understand, but you can also go over it into as much technical detail as you want.

So when I realized what Bitcoin was trying to resolve, which was not having 2008 global financial crisis. I was very intrigued. The press was saying it was for evil, which is not the case at all. And then you suddenly understand, oh hang on a minute, we’re in a fiat currency—didn’t realize what a fiat currency is, and I used to be an IFA (financial advisor). So, you know, it’s not something we’re told: what’s a fiat currency, what the challenges with that are, the fact that we’re no longer backed by gold, and so on.

And then I was really just hooked on the principle of it. And, again, anyone who listens to anything through Andreas Antonopoulos recognizes the good it can do in this world.

So then I still didn’t know how to buy it. A friend of mine said, well, if you send me some fiat currency, I’ll get you some BTC. I said, can you do that for me on a monthly basis please? He said, let’s do one better and set up a business—would you like to join me? I said, yes please.

And so that is a very short version of how our BCB Group came about serving the institutional market, which is really difficult because of regulations and being able to handle cryptocurrencies and crypto assets. So, definitely a service that was required but wasn’t really being services.

And so that’s how I got into the industry, and where I started to have an understanding of how blockchain is being used and adapted to solve different problems around the world. The promise of change that blockchain can bring was really exciting to me. And it can make enterprise more efficient in some respects, but more importantly (and interesting for me), it’s a way to get multiple stakeholders to be able to collaborate.

BitIRA: How did The Bigger Pie come about? You guys have a beautiful mission.

Bridget: Thank you. So once I was working with BCB group, we recognized how amazing the women were in the space—and how few of them there were. We wanted to do something about that, being a startup and being bootstrapped. The company needs to focus on its core mission of being able to build and serve the investor and institutional investors.

I just didn’t want to do anything else. I just wanted to see these incredible women shine a light on what they’re doing, making them more visible. I want to attract more women into the space so that we can have an opportunity where there’s going to be another wealth transfer, where there’s going to be another wave of technology that changes the way we do things to have better representation at the table, from the start.

BitIRA: What have been the biggest challenges that you’ve faced professionally or personally?

Bridget: That’s a great question. At the moment, I’m just so overwhelmed with the community that we’re building and the reaction that we’re getting.

There are plenty of places where you can go and have conversations with mixed genders in them. But for me, I haven’t found one where there is a balance in the voice. It’s been really positive to push through that and create that community, and to see that women coming into it are really enjoying that. At Christmastime I was so overwhelmed with the amount of private messages I got to say, “thank you very much, in a short space of time you really supported us.”

I feel like I haven’t even got started yet. We mustn’t have this conversation in a vacuum. The biggest challenge that I’m going to have is to take this community—and this wonderful tone of voice with its wonderful camaraderie—onto a new platform. This is going to shape things up, as it were, and then I’m to start to bring in everyone, all with the vision of having a more inclusive and diverse business culture.

BitIRA: Now, shifting focus a bit more specifically towards crypto and blockchain, what would you like to see happen next with crypto regulation?

Bridget: So that’s going to go a bit more into the crypto side, because you’re doing more supply and price, while with blockchain it’s more management. When you’re talking about digital assets and securities within the financial sector, it’s really hampering progress when you’re a financial institution that has to deal with instruments that are regulated… and you can’t get regulation around and a new instrument. Does that make sense?

Certainly in the UK, the FCA has turned around and repeatedly said that cryptocurrencies aren’t something that they regulate; it’s not in their scope. And that’s a bit unhelpful.

I love what Caitlin Long is doing it in Wyoming. She comes from a traditional Wall Street background. Her motivation was roused once she was asked to go and have a look at Bitcoin by the banks. This is what I love about Kaitlyn and so many others. “Can you go and check out what this stuff is like?” And then she comes back: “I’ve checked it out. It’s amazing. I’m going to go. I’m working on that now.” How people have done that from the Big Four consultancy groups and all of these major global financial institutions?

And then I think she decided that it wasn’t moving fast enough, when she was running or heavily involved in a company. So she thought, “Right, I’m going to change the legislation so we can attract a whole bunch of companies to come to Wyoming and be the center for future assets, crypto, blockchain.” So what do we need in regulation? More Caitlins.

BitIRA: What specific challenges would you like to see the industry tackle next?

Bridget: Well, the idea of The Bigger Pie is to have diversity and inclusion for all. I’m currently focused largely on gender because the number participating in crypto is so low—like maybe 10%. Yet 51% of the world’s population is female; inclusive of all women, across gender fluidity, across cultures and religions, across abilities…

I think if you’re inclusive in in your culture for one sector, you’re generally going to be more inclusive for all sectors.

For me, it’s really important that the people whose problem you’re trying to solve are at the table of how you go about solving it. I know that progress been forced on before. I’m living in a first world country and most of the friends that I have are also first world experienced people. So when we’re looking to solve a problem that’s global and particularly in developing countries, we’re not the right people to do it alone. We don’t understand the local problems, the local nuances.

For example, in first world countries, we’re used to having plumbing and sewage, sanitation, and public works. But you can’t take the solution that we’ve got into a lot of these developing countries. The shanty towns are built already without the pipes and the foundations. You can’t just go in; you’ll destroy everything.

You have to come up with a way to solve the same problem using a different solution. I think that is really key. If we just gather around people who share a similar lens, we’re missing out an awful lot of opportunity, and innovation, and problems that we can solve, and people that we can reach. So that will definitely help with mass adoption.

And then, another challenge: if I had a magic wand when it comes to gender parity… I know that everyone’s not going to have a child, but if we could have equal parenting so that an SMB wouldn’t be able to turn around and say “I can’t afford to hire women because she might go and have a baby” because it would be the same risk to hire a man of a childbearing age…